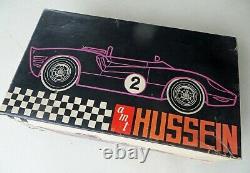 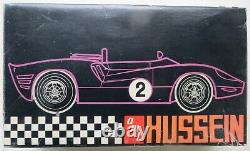 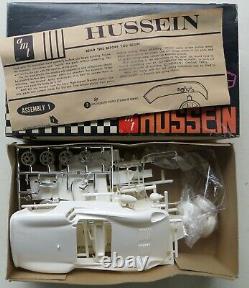 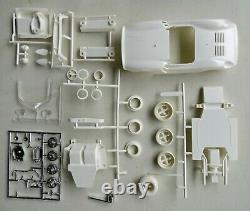 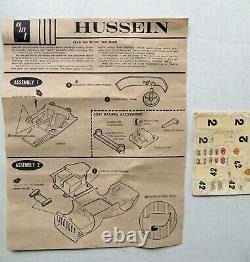 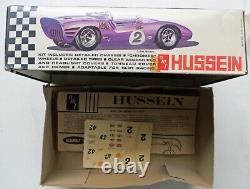 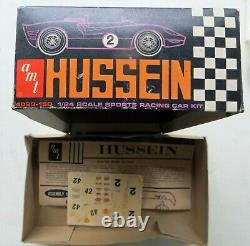 Here is a rare vintage boxed unfinished kit by AMF No. 4023-150, the 1964 Hussein in 1/24 scale. The box has some wear but all parts appear to be present and the only assembly started was one wheel. The kit is complete with instructions and decals. This car will be between 6 and 7 inches when assembled. The kit could be adapted to slot car racing with a motor but this kit does not include those extra parts. The idea for the 1964 Mecom Hussein MK 1 came from John Mecom, Jr. The son of an American oil millionaire, who ran a race team based out of Houston, Texas.

He ran a variety of very fast cars but he wanted something faster for A. He eventually decided to modify a Cooper Monaco to the requirements, so a Cooper without engine, gearbox and body was ordered. The car was named the Hussein 1 after King Hussein of Jordan, who was a great racing enthusiast.

The connection between King Hussein and the Mecom team is that John Mecom's father secured the oil drilling rights in Jordan and the King visited the company's headquarters in Texas. He naturally did not miss the opportunity to see the competition cars and John Mecom decided to call the car Hussein in his honor. See my other listings for more vintage car model kits.

The item "AMT Vintage Mecom Hussein 1964 124 scale model racing car kit unassembled" is in sale since Friday, October 16, 2020. This item is in the category "Toys & Hobbies\Models & Kits\Automotive\Classic". The seller is "olde_stuff" and is located in Wilmington, Delaware. This item can be shipped to United States.